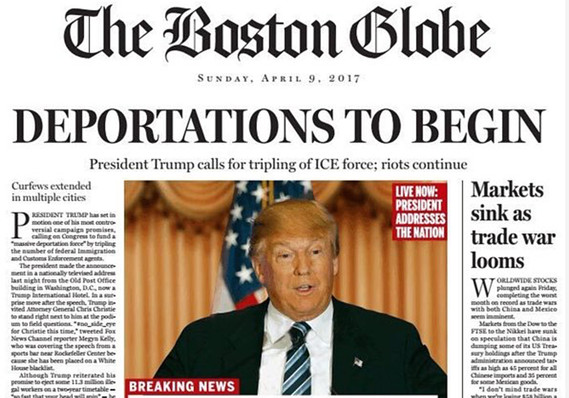 The ALL CAPS front page of the April 9, 2016 edition of Boston Globe read “DEPORTATIONS TO BEGIN,” and was dated April 9, 2017. The front page was an imagined the dystopian world under Donald Trump, and it included articles like “Market sinks as trade war looms,” a new libel law targeting “scum in the press,” and an address by Trump to the nation, saying illegals would be deported “so fast your head will spin.”

In a scathing editorial, the Globe called the mock-up “an exercise in taking a man at his word.”

“Donald J Trump’s vision for the future of our nation is as deeply disturbing as it is profoundly un-American,” it read.

And here we are.

Step 17: “Mock Elections,” from the blueprint to start a revolution, is a nonviolent tool that allows people’s voices to be heard before the real damage is done. One week before Election Day in 2016, the American Statistical Association released the results of a mock presidential election comprised of the votes of high school and college students from 19 states. A whopping Ninety-seven percent of participants favored Clinton – with 49.3% of the popular vote versus 43.3% for Trump.

We know the bad news.

The good news is that many of those underage voters will have turned 18 by 2020, and they’re pissed.

What to do? Pay attention next time you see news about mock elections. Don’t underestimate their power when you see their reappearance in early 2020 – let them be a warning. Make that sh*t go viral.