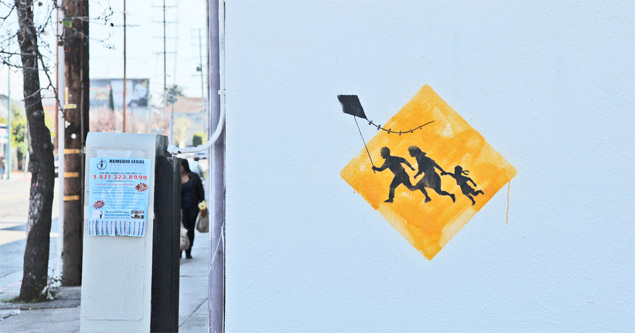 Before I move on to Method 27, two words:

Carlile’s performance of “The Joke” at last night’s Grammy awards has been on repeat all day. It’s one of the most powerful, timely performances I’ve seen, and I just can’t get it out of my head. Watch the performance.

They come to kick dirt in your face
To call you weak and then displace you
After carrying your baby on your back across the desert
I saw your eyes behind your hair
And you’re looking tired, but you don’t look scared

Artists are leading the revolution.

Method 27 can take many forms, but the approach is to take signs that have been used against people and to turn them into something new. The signs can be repurposed, they can disappear or be replaced with something new.

When I was researching this method, I came across today’s LA Times, “Last of iconic illegal immigration crossing signs has vanished in California.” After years of debate, the last of 10 yellow “immigrants crossing” signs that once stood on either side of the 5 and 805 freeways near the U.S.-Mexico border disappeared. The department of transportation stopped making the signs and constructed fences to prevent people from crossing highways instead. (See slideshow, below.)

Method 27 was used in 1942 in occupied Poland by a group of young resistors who called themselves “The Little Wolves.” They stole the signs reading “Nur Für Deutsche” (FOR GERMANS ONLY), signs that were posted in front of Warsaw’s best cafes, hotels and theaters. One morning, hundreds of the signs reappeared on city’s lamp posts and trees where the Germans often hung Polish patriots. Overnight, street signs, placards and inscriptions throughout the city were replaced with the names of the heroes of the revolution.

I featured the artist Banksy in Method 26: “Paint as Protest,” and he’s back again today. A warning that the images in the slideshow below are triggering, but they end on a note we can all live by. I recommend listening to Brandi Carlile as you watch. [Listen.]

Let ’em live while they can
Let ’em spin, let ’em scatter in the wind
I have been to the movies, I’ve seen how it ends
And the joke’s on them.

“Researchers used to say that no government can survive if just 5% of its population rose up against it, but what the research showed is that no single campaigns failed during the time period after they’d achieved the active sustained participation of just 3.5 percent of the population.” – Erica Chenoweth