When Lidia Yuknavitch spoke these words at her workshop last May, I scribbled them in my notebook and something broke loose. My entire life has resisted plot, and seeing my writing life in this context was more than pivotal – it’s become a daily mantra. (If you’re nodding your head, you know.) Art as an act of political resistance is the theme of Step 9, but first, a quick announcement: 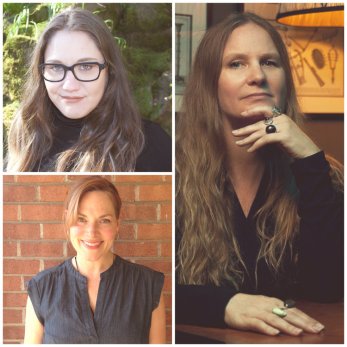 In November, I’ll be joining Lidia Yuknavitch as an online workshop leader for Epistemologies: Writing to Unmake and Remake Meaning. Over the past year, I’ve been a columnist and the curator of Corporeal Clamor, a curated series at Corporeal Writing. Part of the CW philosophy is “leading people into new and unknown territories from which they can make art,” and because I so love collaborating with other writers, this new role at Corporeal Writing sets my heart on fire.

Over the past two years, the writers I’ve met through Corporeal Writing are part of a revolution. They’re publishing pieces like this one by my friend Marissa in Harper’s Bazaar, and last week, NPR featured artist Laura Gibson’s song “Domestication.” Laura was working on lyrics to the song when she took the “Exhausting Metaphor” workshop at Corporeal Writing a year ago. As an added bonus, Anya Pearson, who she met at the workshop, plays a character in the video.

This is what Lidia means when she calls Corporeal Writing “a creative process that values participant collaboration.” If this idea sets a fire inside of you and you’ve got something to say, come write with us.

Step 9 in the “blueprint” From Dictatorship to Democracy emphasizes the critical role of artists and intellectuals in making political and social change. Lidia Yuknavitch’s The Book of Joan was released just after T– entered the White House, and the post-apocalyptic nature of the work struck a chord with the public.

“Telling the truth with precision and rage and a visionary’s eye, using both realism and fabulism, is one way to break through the white noise of a consumerist culture that tries to commodify post-apocalyptic fiction, to render it safe.” – Jeff VanderMeer, A Brilliant, Incendiary Joan of Arc Story for a Ravaged Earth, The New York Times

Throughout history, times of political turmoil have been influenced by works of art. My project 3.5% was inspired by a pamphlet by Gene Sharp that has been passed around the globe since its release in 1993. Others on the list of transgressive game-changers:

A Room of One’s Own – Virginia Wolfe

To Kill a Mockingbird – Harper Lee

50 books that changed the world.